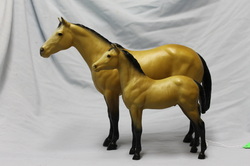 JCPenney SR from early 1980s.  Given to me by my mother for Christmas that year.  The only models she ever gave me that I still have.

The color is much darker in this picture compared to natural lighting.  They're fairly yellowish in person. 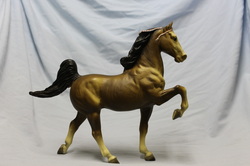 Old five gaiter in "sorrel" that was a gift from a school friend, now Jean Carpenter Krason, DVM.

He has eyewhites and just looks cool. 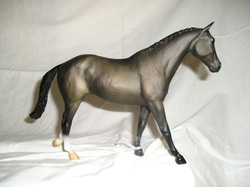 One of a kind paint test sample from about 1991.  After releasing the "ageless bronze" Hyksos model, Breyer wanted to see about adding metallic paints to realistically colored models, which resulted in the metallic gold sheen on Turbo at 1992 Breyerfest.

This dark bay paint job has highlights of bronze and this causes some interesting color changes of the model.  Unfortunately some of them are not terribly flattering, so this combination was abandoned.

Obtained from the collection of Megan Quigley, former editor of Just About Horses. 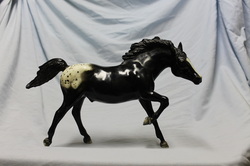 I don't think my grandmother quite knew the monster she was creating when she purchased this model--my first Breyer--for Christmas in 1975.  But not too many years later my parents had to institute the "no more hooves" rule to try to limit my growing collection.

It peaked at about 300 models, and I'm down to just over 100, but that has expanded to include the other media--HRs, Stones, Customs (R/R/H 'til I die, though), and Artist Resins.
This is the one that started it all.  Broken (repaired) leg and "improvements" to his markings not withstanding, this model is never going anywhere. 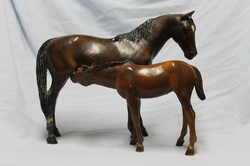 One of King Thunder's first "girlfriends," Lucky was a gift from my grandmother.  Red is obviously her son.  For some reason I thought that the foal resembled the Man O'War model, hence the use of his nickname.  Man O'War's dam's name, Mahubah, was supposed to mean "Good Luck or Good Fortune" so she got pegged as Lucky.

I painted markings on their faces to match pictures that I found, and at one point attempted to turn Lucky's ears to face forward.  Turns out that she's a chalky (broken legs and ears prove that she's made of purple plastic!) but I really need to re-do those ears.  They are embarrassing. 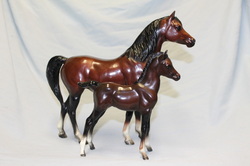 Young girls should not use wine and spice items to name models.  Unfortunately I didn't really know better at the time.

Lady was named because of the deep wine red color she was painted.  I renamed her to "Dark Rose" in Arabic later in life.

Tara was purchased from the Pony Ranch on Chincoteague Island in 1978 (?) and I thought Tarragon was a cool word.  Silly me.
"Mr. Ragman" aka Rags to Riches (prior to the race filly of that name!) 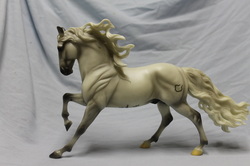 I traveled with the family who owned Nobel to Breyerfest the year he was the celebration horse.  Unfortunately he was quarantined in Colorado due to an outbreak of Vesicular Stomatitis and was unable to attend the festivities.

He is signed by the entire Vale family, including Kelly and Jim, who have since passed.


There is a photo of the real horse in that section of the website. 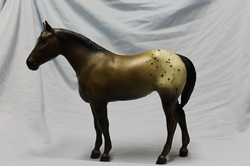 Appaloosa yearling.  Purchased with money I saved myself from Toys R Us, she cost just under $4 and came with scratches on her shoulders.  I didn't care--she was a favorite.

had a thing about appaloosas and royalty names. 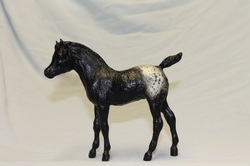 The only model my brother ever gave me, when I was *really* sick.  I had a thing about appaloosas and royalty names. 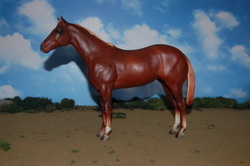 Original issue Lady Phase, now a little (a lot) worse for the wear. 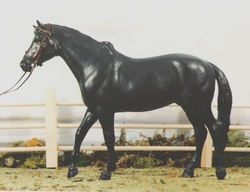 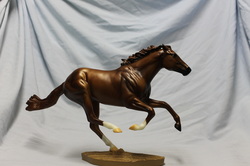 Secretariat on the Smarty Jones mold 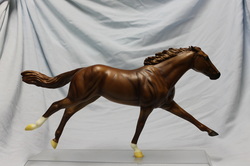 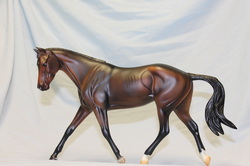 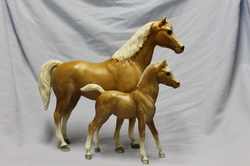 Sunny was purchased at the same time as Lucky and Red, because she was a palomino and I was ten years old.

Zany came to me as a trade for some note cards because Sunny needed her foal and Zany needed a mom.  Pre-teen logic, ya know? 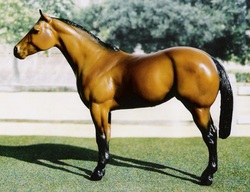 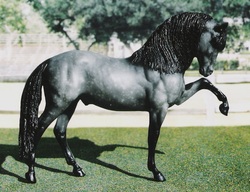 El Campeador, a special run for Jamboree.  He is a variation with a grey nose instead of a black nose.

Too many to list at this time!  I have a lot of models, most of which are in storage.  Eventually I might complete this, but I'm not in a huge hurry.